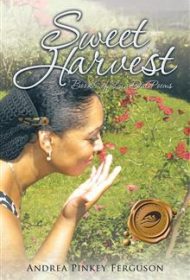 In Sweet Harvest, Andrea Ferguson writes about love, betrayal, addiction and relief, as well as life’s other struggles.

At the beginning of the book, Ferguson explains that these pieces are “full of melodic words written in a poetic manner that plays with the emotions through laughter and tears.” While the title refers to “poems,” these entries include no line breaks and appear like single paragraphs; rhymes occur inconsistently, such as  “For everything there is a price to pay. You can choose, and do this you may.” A recurring message of Christian faith runs throughout the book, and each poem ends with the sign-off, “Luv dat.”

While Ferguson seems earnest in her desire to convey deep meaning, her writing is often cluttered and delivered in a stream of consciousness style that’s difficult to follow. Occasionally, awkward sentences further muddle the meaning. In a piece titled “A Matter of Our Distorted Perception,” for example, she begins: “A matter of our distorted perception is opinion to which we hold on.” After the oddly worded and puzzling start, the piece then goes on to note the importance of paying attention, not making a mountain out of a molehill, the senselessness of “senseless fights,” fellowship, how we relate to others, how some people are despicable…and so on. The piece’s ultimate point is lost in this string of seemingly unrelated ideas.

Certainly poetry—or in this case, prose poetry—can take liberties with language that other art forms can’t, but it still must strive to be comprehensible on some level; these pieces are hit and miss in that regard.

Some readers might relate to Ferguson’s unusual approach, but most will be frustrated by the lack of clarity in these pieces. Overall, the book would greatly benefit from revision with an eye to improving focus.