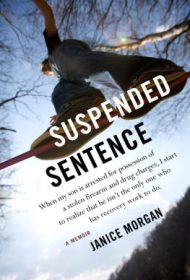 Partly a look at the criminal justice system, partly a personal journal, Janice Morgan’s absorbing Suspended Sentence reveals her turmoil after her son’s arrest on drug and gun charges.

Years before her son’s mugshot ran in a Kentucky newspaper, Morgan knew Dylan was troubled. As a child, he was often inconsolable: “[H]e could get hard-core upset — and stay that way for what seemed like a very long time,” she recalls. As he became more violent in his teens, charges against him mounted: assault, shoplifting, drug possession. A court-ordered evaluation led to a bipolar diagnosis.

By 2011, Dylan, 23, faced three felony charges and prison time. Opting for Drug Court, he was sentenced to repayment of court costs, drug tests, treatment and a curfew—not easy for a part-time college student “taking psych meds and/or prone to self-medicating” with alcohol and pot.

It was also hard on Morgan, who accompanied him to court appearances, drove him to AA meetings and lent him money. Letting Dylan handle the consequences of his decisions was hard for Morgan, who eventually concluded that “Sometimes the best thing to do (for Dylan) would be nothing. . . . It was his job to unlock his own doors, find his own keys.”

Morgan writes in a clear, crisp style. Her detailed, unflinching account is fortified by hard-won insights about her relationship with her son—and about herself. As a mother, she believed herself to be strong and in control, until forced to recognize her own vulnerabilities: “All that damp, anxious, wormy self-doubt… This whole mom business was way more complicated than I ever thought it would be.”

Morgan includes chapters about a friend’s daughter struggling with mental health issues. These only tangentially relate to Dylan’s story and interrupt the otherwise engrossing narrative.

That said, readers will find this personal tale of addiction, mental illness, and the struggle to change old behaviors a thought-provoking study in parent-child bonds and the importance of letting go.