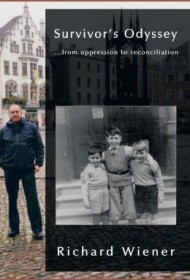 Richard Wiener was an 11-year-old in Wittenberg, Germany, on Kristallnacht, “the opening salvo of the Holocaust,” in November 1938. Armed neighbors came to his family’s home and smashed furniture, while across Germany, “a mob mentality nurtured for years had, at long last, found focus in action.”

One of the fortunate children to escape Nazi Germany via the Kindertransport, Wiener in this memoir recounts both his subsequent world travels as an American patent attorney and his internal progression to overcome fear and shame. Unfortunately, he devotes too much ink to the former (describing post-retirement visits to 15 countries in one chapter alone) and not enough to his unusual and compelling work with men’s consciousness-raising groups which helped him find his life mission: advocating for reconciliation.

The author, who once fancied himself a novelist, writes concise, evocative prose, and his years of psychoanalysis nurtured a thoughtful, caring soul. The reader would benefit from more chapters such as the book’s latter entries, titled “Forgiveness” and “Inward Journey,” and fewer with the pedestrian memoirist’s fare of youthful hitchhiking, romance and career uncertainty.

Wiener’s goal is to demonstrate that one’s past need not dictate one’s future. In 1990, seeking closure, he returned to Wittenberg for the first of several visits and realized how much suffering the Nazis had inflicted not only on Jews, but on the entire German population. “And with that realization, I started to feel compassion for those whom I had regarded as my persecutors.” He writes to inspire us all to forgive and move forward, and in that goal he is highly successful.

This Tai Chi-practicing grandfather offers us a gift with his story and lessons learned, but leaves us hungry for more depth and detail about the people he met and the enlightenment he experienced on the road from oppression to reconciliation.