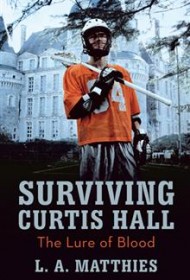 L.A. Matthies’ debut young adult novel revolves around an exclusive prep school where all is not as it seems.

Sixteen-year-old Tristen McCoy, a star lacrosse player, is recruited from his New Jersey public school along with some of his classmates by Curtis Hall, an elite private school. As the newcomers struggle to adjust to their new surroundings, they discover strange things about Curtis Hall: A maze of tunnels lies below the campus. Some of the students attend classes only at night. And participation in the school blood drive is mandatory.

When Tristan meets fellow student Marcella, he feels an instant attraction to her. But Marcella has a secret: she is a vampire, as are many of Curtis Hall’s other denizens. Marcella is working with an eccentric science teacher to find ways for vampires to coexist with humans. But the same cannot be said for her brother and his followers, who live in Curtis Hall’s tunnels and are getting hungry.

The major flaw in Surviving Curtis Hall is Matthies’ writing style, which is sometimes tortured: “Marcella came back to the moment as if waking from a dream, her eyes blazing beneath her cool façade and her chest burning with hunger,” Matthies writes when Tristen and Marcella first meet. The novel is also told from several points of view: there are almost as many narrators as there are chapters. While Matthies handles this technique fairly well – the characters are likeable and relatable – it sometimes makes the novel feel rushed.

Still, Matthies offers interesting characters and some refreshing twists to the vampire mythos – including an unexpected explanation for why a vampire prep school is located in New Jersey. Despite its weaknesses, Surviving Curtis Hall should hold some appeal for young devotees of vampire fiction.