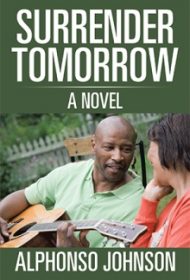 In Surrender Tomorrow, author Alphonso Johnson sends a high rolling character out on a lowbrow journey.

The story opens with Francois Fontaine boarding a Greyhound bus with a Gucci suitcase in hand. We come to learn that he’s a financial wunderkind, but he’s used those skills to skim a large amount of money and deposit it into various hidden accounts. Bound for Florida, he meets some men on the bus whose fedoras may indicate mob involvement, and who seem to know a lot about him. Will he be safe?

Johnson calls this a “caper,” and it’s easy to see how it could be a rollicking crime story. Unfortunately, the writing is so muddled that readers will often lose the plot thread. There are multiple subplots: a car crash, a family road trip with big revelations, and more, along with plentiful backstory told in flashbacks. But the narrative drops in and out of various scenes from one paragraph to the next without warning. Readers will find it jarring to be in a car, then abruptly back on the bus, then find themselves in the present day, only to be relocated to another decade.

Additionally, the title character, Surrender Tomorrow, has family members named “Walter Payton Tomorrow” and “Feathers Fly Away Tomorrow.” But why the unusual names? It seems like gimmickry for its own sake and makes very little sense in the overall context of the novel.

As a result of such puzzling elements and confused writing, Surrender Tomorrow will likely have a hard time connecting with readers. It could potentially be a tightly wound thriller with a sense of humor in the vein of Elmore Leonard, but it needs significant editing for clarity and to make readers care about each character’s goals before it’s likely to find an appreciative audience.