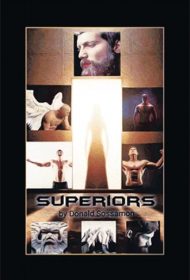 Donald Sossamon’s debut novel, written inexplicably as a screenplay, blends biblical myth and superhero fantasy into a bare-bones story pitting a misfit group of benevolent protagonists against a demon and a vampire bent on spreading darkness across the world.

The narrative begins in 1797 when three Quakers confront a man who allegedly turned into a “beast” in front of the town barber. The man, a fallen angel, injures the Quakers during a violent confrontation, and the men, including one named Silas, are turned into vampires: “the first vampires ever on Earth.” Although transformed into a monstrosity, Silas remains a God-fearing man who experiences visions—waking dreams that direct him to evil in the world.

Thus begins a conflict between Silas and a malevolent duo – Mammon, a demon lord, and Matthew, a newly turned vampire – whose mission is to populate the world with a demonic army. Silas prepares for an epic battle with countless innocent lives in the balance, following his holy visions and, with the help of a scientist, genetically engineering two half-giants to aid in the fight. After Silas adds a young boy with initially unrevealed abilities and an angel named Joseph to his group, the battle for the soul of the world begins.

While the premise has potential, the decision to write the story as a screenplay discounts reader expectation concerning genre fiction. Because of the format, there is little character depth. One character, for example, is simply described as 65 years old and wearing a “button up T-shirt.” Additionally, with an unbroken script and no chapter breaks, the narrative has no organic ebb and flow, creating a tiringly incessant reading experience. The lack of any significant description – either world-building or character development – makes for a skeletal and emotionally detached read.

Largely because of its format, this potentially solid fantasy novel sacrifices all of the elements that could have made it an intriguing read.