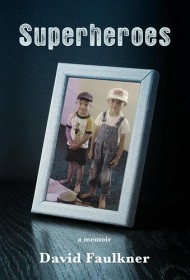 This memoir recounts the childhood of author David Faulkner in what begins with two seemingly grounded parents in their suburban home outside of Reno.

In his early years, David enjoys an almost idyllic childhood, ever at play with his older brother Robert. The two spend their summer days exploring, biking and playing with their favorite superhero toys. While David’s sleep is inexplicably fraught with nightmares from which he has difficulty awakening, his childhood seems normal.

Then one day, when his father is away, David’s mother announces that she likes it better without their father there. His father moves out, seeing the boys only every other weekend. But even as his mother moves through a succession of boyfriends, the boys lives seem to go largely uninterrupted — until his mother marries a man named Bob, and suddenly life takes a tremendous nightmarish turn.

While the story has many compelling passages, Superheroes suffers somewhat from its pacing. It begins with a gripping opening that is set after the mother’s second marriage. But Faulkner then returns to his boyhood when all is seemingly well, and it’s nearly 100 pages before the parents’ divorce is detailed.  While perhaps interesting to Faulkner’s friends and family, the events of his childhood lack the drama promised at the start. The book is nearly two-thirds of the way through when the true nature of their new stepfather is finally revealed. From here on, the memoir is again a gripping, albeit sad, read.

The tale would benefit from some tightening up front: retaining some of the detail of the happy days to establish the stakes, but getting to the horrific turn sooner. Once Faulkner does get to the meat of his tale, this is a page-turner.

Overall, Superheroes is a professionally written narrative, told with detail and through a young boy’s innocent eye. While readers are likely to feel impatient with the story early on, those who persist will be rewarded for the wait.