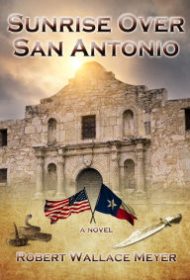 In this well-imagined alternate history about the Battle of the Alamo, Robert Wallace Meyer adds two fictional Alamo defenders and, unlike real events, the pair’s efforts bring victory to the embattled Texicans.

The Alamo’s actual historical figures, William Travis, James Bowie, and Davy Crockett, have been well documented, and the author doesn’t waste time exploring these characters in depth. Instead, it’s Meyer’s fictional heroes, John Ray and Emil Joseph, who compellingly drive the novel. John’s the emotionally damaged survivor of a Comanche massacre, caught up in the Alamo’s defense while attempting to anesthetize his pain. With Emil, Meyer adds a bit of fantasy. Obsessed by Texas history, Emil loses his 21st century carpentry job. That night, with the help of a “dream facilitator,” Emil time-travels to Alamo.

With custom ammunition for Jaeger double-barrel shotguns, plus a lightweight highly mobile cannon, the defenders turn away Santa Anna’s attacks, dooming his army to total defeat at San Jacinto. Meyer’s expansion of the legend then follows the defenders as they begin to organize a thriving community, with a bank, light industry, and small farm cooperatives, all protected from Comanche raiders by newly trained “rangers.”

With rousing action and a touch of romance, Sunrise is a bit like L’Amour and McMurtry, but Meyer, in Hollywood jargon, has gone “high concept.” And there’s the rub, for there are distracting flaws, including the difficult-to-carry-off dream fantasy (the narrative would be much more focused without it); rapid, sometimes-hard-to-follow changes in point-of-view, and occasional problems with grammar and syntax.

That said, the story’s events, quality of dialogue, and detailed sketches of frontier life and the picturesque Texas setting are sure to please fans of the era, who will happily overlook its flaws. These readers will find that Sunrise Over San Antonio passes quickly, despite its 500-plus pages, delivering a darn fine ol’ West yarn that reaches beyond the bloody events of March 1836 to tell an engaging and entertaining story of human resilience.