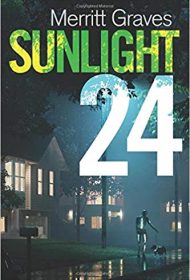 In Dorian’s world, nano-implants and genetic augmentation make everyone smarter and stronger, providing the door to better living. But without multiple doses of the regimen known as Revision, one lacks hope of “getting a job that makes you enough money to keep Revising.” Without it, one becomes a wage-slave, taking meaningless drudge work to survive.

Dorian’s family robot helps Dorian learn French, so he can talk with the rich Revised kids he envies, who use it to further distinguish themselves from the Unrevised. But Dorian’s family is part of the ever-expanding portion of society who can’t afford Revision for him, even though he’s athletically and intellectually gifted.

Feeling short-changed by society, Dorian rebels. He enlists his friend Ethan to rob houses to obtain money for Revision—ultimately getting caught up in an increasingly tightening, horrifying downward spiral.

Graves skillfully illustrates the mindset of a teenager who feels he’s been dealt a raw deal. The author also uses virtual reality and computer science to good effect. (At one point, Dorian builds a flying bot—a fake bird—to spy on his intended victims.) The theme is timely, and Graves creates a world so close to today’s society that it hurts.

The story’s problem, however, is its characters. Dorian’s brother and friends are almost completely self-absorbed. Likewise, Dorian is a user who can’t see beyond his own ego. Even when he “falls in love,” he uses the girl to gain access to her parents’ house so he can rob it. When he discovers her dead body, he merely shrugs it off. As such, readers may find it hard to empathize with his plight.

Despite this issue, the story plunges readers into a futuristic, hi-tech, psychological roller-coaster. Those who aren’t bothered by the characters and who appreciate dark stories will find much to like in Sunlight 24.