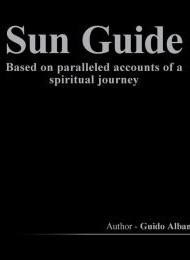 Myths and legends can illuminate aspects of the way we live today, helping us view our lives in the grander scheme. Sun Guide attempts to draw from that storytelling tradition.

The story itself is easy enough to recount: A baby, abandoned in the forest, is raised with a litter of wolves. The mother feeds and cares for him, and the other wolves become his siblings. They guide him, then send him on his way. Wandering the forest, he receives aid from an eagle, the sun, and a nest of fire ants. He has a spiritual awakening at the end of the story and goes out into the world to be among humans.

Sun Guide features some unusual imagery, i.e.: “He fell into a deep rem [sic] of sleep, as he started to travel through dark, blackened space. He was flying inside an oval shelled egg of the mighty eagle.” The young man’s numerous trials—being trapped in a whirlpool, meeting and befriending a lion—come fast and furious in the book’s 15 pages, but it’s unclear what the point of his journey is. Author Guido Albanese claims the book is written for anyone who has a dog for a pet, as they’re descended from wolves. That connection doesn’t hold up throughout the book, however, as the wolves simply help the young man at the beginning of the story and send him on his way.

Sun Guide seems to draw from Native American storytelling, but perhaps the “paralleled accounts” in the book’s title refers to other traditions as well. Readers who like myths with nature at the center of the story may enjoy this unusual tale, despite its overall lack of focus.