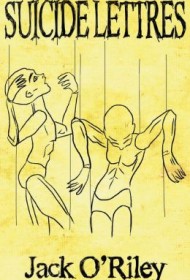 In these well-written, quirky short stories, the author portrays characters who are wrestling with their own self-destructive natures.

The collection contains 20 stories that are unrelated, except for a two-part rendering of the biblical story of Jonah and the whale. (This may seem to be a misstep in a book of modern-day short stories, but it fits nicely with the overall theme of human struggle and redemption.) Despite the title, suicide is not the end game in most cases.

Jack O’Riley is a skilled storyteller who delivers spare but evocative prose. In the best of his stories, he lulls readers into thinking the story is headed in one direction before drastically turning the tables. In the Twilight Zone-like story “A Friend of the Devil,” for instance, a young man appears to be taking a relaxing bath. “He stretched his legs up the wall, letting his head sink under the water…He resurfaced, sitting back comfortably, sucking in the drowsy mood of the candlelight…He held the razor blade, strongly, staring at his wrist … ”

The author also has an ear for realistic dialogue, as in “The Time is Free,” in which protagonist Duffy must confront his ambivalent feelings about his mother when she dies unexpectedly. Her death pushes him to examine his relationship with his girlfriend, who arrives exhausted and spiteful after a long flight. O’Riley easily captures Duffy’s frustration and anger: “I haven’t seen you in almost a week and we’re going to mom’s funeral and you’re acting like this! And because of what – because you didn’t get a good night’s sleep. Because you had a lousy layover!”

While the book contains grammatical errors, such as the use of “there” for “they’re,” such mistakes are not fatal, as readers will relate to these characters struggling to define their place in the universe and often misinterpreting the signs along the way. Sometimes ambiguous in meaning, but always compelling, O’Riley’s work provides intriguing fodder for discussion.