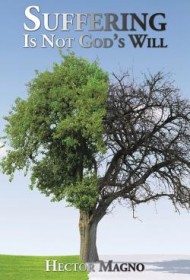 Growing up in war-torn El Salvador led Hector Magno on a lifelong quest to explain the meaning of suffering. In this book, he presents a solution from a Christian perspective. Through an original reading of Scripture, with special emphasis on the Book of Job, Magno presents a consistent account of the problem of evil.

Magno posits that God created truly free beings that have the capacity to be in loving communion with Him. Since these beings are free to love or reject Him, God accepts limits on His own power. What God is unable to do is to coerce anyone to love Him.

The freedom to reject God’s will creates the potential for sentient beings to do harm and to wreak havoc in the world. In Magno’s Biblical cosmology, evils and afflictions are caused either by human beings or by fallen angels who have used their considerable capabilities to subvert the created order. God offers a way out of this broken cosmos by creating a new world in which He and those beings who are loyal to Him live in peace. Through the god-man Jesus, God suffers death and then leads the souls imprisoned in this world to a new life in a new creation.

Magno’s God is love and nothing but. He inflicts neither suffering nor death, and forgives everyone. He wishes only to save us. Anticipating arguments to the contrary, the author attempts to reinterpret or retranslate numerous passages from the Bible, which, in most translations, imply that God sometimes inflicts suffering. Whether all of these retranslations withstand scholarly scrutiny is debatable. Also, a fair amount of Magno’s book finds him apparently steeling himself against possible objections rather than explicating his case. He apologizes for challenging the reader even before he has done so, which may be offputting to some.