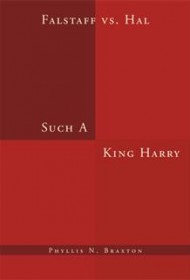 This learned interpretation of Shakespeare’s four “Falstaff” plays may prove, in time, to be a valuable addition to the vast pile of books devoted to the greatest writer in the history of English. Until the jury returns a verdict in a century or two, let’s just say that Phyllis N. Braxton’s provocative take on Sir John Falstaff and his sometimes mate Prince Hal, aka King Henry V, makes for fascinating reading—especially if you’re a Shakespeare scholar or are otherwise immune to the dry repetitions of academic prose.

Braxton’s thesis: the Bard is not, as many of his most famous detractors have claimed, a “realist” playwright bound by conventions of dramatic unity and historical accuracy. He is, rather, a surpassing fantasist in the manner of his time and thus impervious to attacks on his sometimes bewildering plots, inconsistent time frames and factual “errors” regarding everything from weapons to customs at court.

Braxton, a Cambridge, Massachusetts, native who has taught at Howard University and published articles on Shakespeare, finds solid textual evidence in The Merry Wives of Windsor, Henry IV (Parts I and II) and Henry V that the plays rest on one overarching astronomical metaphor, as profound as it is playful. To wit: Prince Hal becomes the sun as he ascends to the English throne; Falstaff’s ever-changing moods and “confusing” behavioral shifts represent the phases of the moon; even the fat man’s cronies are phenomena of the sky: drunken, red-faced Bardolph a planet, bombastic Pistol a shooting star, and so on.

The Elizabethan world view, Braxton writes, was anything but literal, and readers of Shakespeare’s work should revel in “the delightfully fantastic worlds of such allegorical inventions as the four Falstaff plays.” Still in doubt? The author ‘s provocative main text is followed by 46 pages of supporting notes and citations.