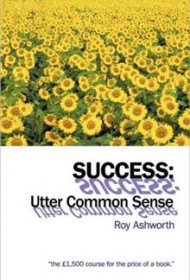 Though retired, Roy Ashworth remains a busy business consultant traveling between homes in England, France and Malaysia. In his new book directed at those who seek direction to advance in the business world, he offers his formula for “SUCCESS,” an acronym for “Scope,” “Ultimate Aim,” “Circumstances and Context,” “Concerns and Issues,” “Essential Question,” “Strategic Solutions” and “Specific Steps.”

Ashworth painstakingly covers each topic, and makes many salient points, such as advising readers to avoid “worthless plans and gobbledegook strategies,” misdirection, ignorance and other roadblocks.

In addition, nothing livens up a nonfiction book like real-life examples, and the numerous examples of business ineptitude he has witnessed are real eye-openers. They amuse and offer instant lessons about what to avoid. For example, Ashworth picks apart a perfunctory marketing review that he witnessed, noting that although the numbers looked good, they lacked perspective, badly needed fleshing out and opened the preparer to lots of tough questions.

Outside of such engaging real-world stories, however this is a tough slog. Ashworth means well and, indeed, offers plenty of common sense and guidance on how to make convincing business proposals and avoid pitfalls, too often, though, the book gets bogged down in an academic approach and also could have used more editing before going to print in order to avoid such problems as punctuation errors.

Those with enough self-awareness to realize they don’t present well will get the most from this book, as it will teach them to see both the big picture and the smallest details involved in organizing their ideas. But, unfortunately, they’ll have to wade through lots of dry prose to get there.