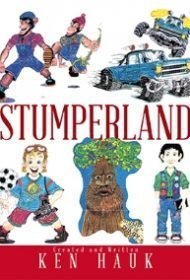 Two boys earn a place among defenders of nature in the intricately imagined children’s book Stumperland.

The story revolves around two orphans, Malibu Mitch and Mikey, who meet the Positive Force Team and help defeat a sawmill owner who’s cutting down trees illegally. Invited to join the team after their victory, the boys visit the magical forest called Stumperland. The forest is protected by an ancient tree named Woodward Stumpingham, who organized the Positive Force Team as his enforcers.

The book has an unusual layout: Although it’s referred to as a children’s story, it’s presented as a screenplay, beginning with a synopsis and song list, some tunes written by Hauk and others by well-known artists such as The Beatles and Genesis. Several pages of character lists, descriptions and illustrations follow before the 20-page screenplay begins. The end of the book features song lyrics, additional scenes and marketing ideas for Stumperland, from board and video games to clothing, food products and a theme park.

It’s evident that Hauk invested a lot of work developing the Stumperland world; even minor characters have rich histories and personalities. With talking trees, trucks and chimpanzees, Stumperland is meant to appeal to young children while imparting lessons on ecology. It reads, however, like a proposal pitch to television executives or investors, which isn’t an ideal way for young readers to experience the story.

Despite illustrations early in the book, most of the story is delivered as text, requiring readers to translate asides such as “We see Mookie & Dookie, hiding up in the treetops” into visual images for themselves. That might prove difficult for young readers.

Some children or adults might enjoy the book’s unusual format, perhaps using it as a template to perform Stumperland as a play. But despite impressive character-building, Hauk’s plot—particularly the confrontation with the sawmill owner, which moves too quickly and feels anticlimactic— isn’t compelling enough to attract a wider audience.