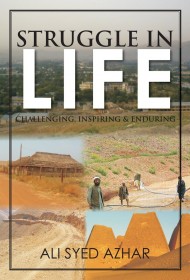 In this age of global media, few remain unaware of the economic, social, political and humanitarian crises afflicting so many countries around the world. In his book, Ali Syed Azhar, a civil servant working with various international relief organizations, provides an insider’s view of life in a handful of these struggling Third World nations.

The author, who spent several years working in the Middle East and Africa, explains that his book “provides an insight to the hardship and insecure work environment in war torn countries.” Azhar chronicles the chaotic effects of war and civil disruption in dangerous and dysfunctional places such as Afghanistan, Sudan and South Sudan, including Darfur.

The result is part guidebook as he shares impressions of the physical environment, local customs, political and social architecture, and lives of ordinary people in these places. He also offers work-related insights, such as the difficulty in tracking foreign aid, and occasionally brushes up against such colossal inhumanities as ethnic killings, rape, and child soldiers. Besides describing problems, Azhar sometimes suggests solutions: tax reform, promoting overseas trade, education (especially for women) and so on.

Azhar is obviously dedicated to improving lives, even when it means risking his own. (On one occasion, he used his own money to help establish a library in the Sudanese capital Khartoum). But good intentions are not enough to save this book. While it does offer some pearls of wisdom, readers have to wade through far too much difficult prose to find them.

English seems to be the Indian-born author’s second language, and his fractured grammar and stilted expressions are constant distractions. Above all, though, the book lacks focus. For example, Azhar peppers the text with tributes to his colleagues and co-workers; no doubt they appreciate the kind words, but other readers may feel less charitable about these pointless digressions.

In sum, while the book has altruistic aims, it lacks the polish needed to attract a wide audience.