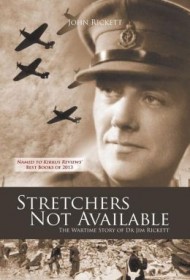 In this emotionally powerful book, Dr. Jim Rickett paints a frank picture, simultaneously heartrending and exhilarating, of wartime suffering, logistical nightmares, determination, and courage as seen through a surgeon’s eye in WWII-era England and Yugoslavia.

Author John Rickett, an MD like his father, has done an estimable job of bringing his father’s wartime journals and letters to life, interposing contextual information to elucidate both the time and situation: be it England during the blitz, or partisan activity in Yugoslavia during German occupation.

Part One vividly relates Jim Rickett’s experiences as a civilian GP in Southampton without formal surgical training during the Portsmouth blitz of 1940-41, when, “at the end of the day, often with the sound of a bombing raid in the background, he reflected on his day’s work,” occasionally an operation “carried out under anesthesia on the dining-room table.”

But it is Part Two that is the real triumph, describing his work running a front-line surgical hospital without adequate supplies under the most adverse conditions imaginable on the Yugoslav island of Vis in 1944, when “there was a continuous rattle all night long of small arms as the partisans loosed off at shadows or even the whisper of wind in trees.” Imagine a MASH unit behind enemy lines with only British commandos and Tito’s partisans between it and a prison camp.

Jim Rickett pulls no punches, and his straightforward, often-vivid descriptions of wartime brutality or surgery under extreme conditions can be shocking. (“I asked him to open his tunic and found a penetrating abdominal wound with seven feet of small intestine lying inside his vest…”

John Rickett’s seamless editorializing, skillfully written in a style so similar to his father’s that the reader is often surprised to find he is suddenly returned to Jim Rickett’s first-hand account, adds smooth flow to this unforgettable memoir that should appeal to a wide audience.

BlueInk Heads Up: Highly recommended for WWII history buffs, and medical personnel interested in what it was like to be a surgeon in England during the blitz or on a rural island in the Adriatic during WWII. Residents of Southampton, UK, might be particularly interested in these stories of the blitz in that area.