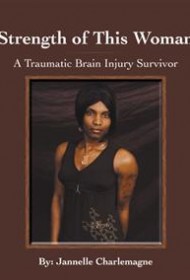 The author of Strength of This Woman survived a crime so horrifying it’s difficult to read about. Her bravery in telling her story can’t be underestimated, although it’s unclear who the intended audience for this book might be.

Jannelle Charlemagne suffered a traumatic brain injury when her then-husband attacked her with a board that had nails in it. Charlemagne was comatose as a result of the attack, and came to, only to learn that the couple’s infant daughter, who she had been holding, died as a result of injuries from the assault. Her husband tried to end his life multiple times before being caught and imprisoned; he’s serving a double life sentence, and the couple has divorced. Charlemagne’s recovery has been slow and complicated, but she has returned to school and is slowly trying to regain her independence.

The book is unfortunately very muddled. Charlemagne will sometimes repeat herself three or four times in a paragraph, and there are lengthy passages that are clearly reprinted verbatim from her medical charts and make little sense to a lay reader unfamiliar with medical terminology. The author offers numerous photos, including several of her daughter in a casket, that are heartbreaking to look at. And Charlemagne writes at length about an older sister who she claims stole from her and from whom she is now estranged. It’s hard to see how the average reader could make sense of the many elements and disjointed delivery.

Strength of This Woman doesn’t have much to offer a general interest reader, but it’s a powerful testimony to the author’s extraordinary will to recover and move on.