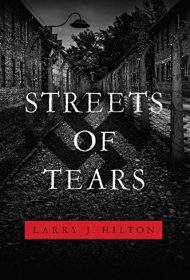 Not often is the story of World War II and the Holocaust told through the eyes of the “other side”: the “ordinary people” who knowingly or unknowingly acquiesced to, approved of, or participated in Nazi genocide and carnage. Streets of Tears seeks answers to such ever-lasting questions as “Did they know of the death camps?” and if so, “How could they have allowed it to happen?”

The story is mostly told through the eyes of an upper middle-class Austrian family—the Baurs—as they try to navigate the hyperinflation and starvation of the defeated nations after WWI (a grand piano could be bartered for three months of potatoes) and the subsequent results of Adolph Hitler’s rise to power and eventual defeat.

The Baur family is headed by a banker, Viktor, and his wife, Else, Austrian nationalists who are attracted by Hitler’s rebirth of the German economy. They suspect Jews are the cause of the nation’s troubles. A son, Fritz, joins the SS and a daughter, Elke, the story’s main protagonist, joins Hitler Youth and works for his propaganda machine during the war.

Central to the story are questions of whether it was the post-WWI economic devastation or hatred of Jews that fueled the populace’s support of the Hitler nightmare. Should we feel sympathy for the family or loathe them?

Hilton brings style to the storytelling. Describing the post Great War devastation, he writes, “Behind the baroque masonry of superb elegance lay dark, dank corridors filled with the stale smell of over-boiled cabbage and the clearly discernible odor of hatred and envy.”

Yet, sometimes the story becomes confusing as the chapters and characters revolve back and forth in time and place. Also, a few characters become shallow illustrations of the author’s historical observations, and the narrative takes on a didactic tone.

Overall, however, Streets of Tears is a valuable contribution to our understanding of one of the most shameful and murderous eras of world history.