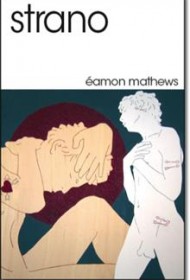 Eamon Mathews’ Strano is a coming-out novel that wears its heart on its sleeve – and everywhere else. Both Mathews and his protagonist, Damien, are Irish, which might explain the excess angst that often infuses this uneven but ultimately enjoyable debut.

Sent to live with his maternal grandmother by parents literally overrun with children, Damien is steeped in his Catholic granny’s faith – to the point, in fact, that he applies to an Irish monastery after high school and is accepted as a novice. It’s a cloistered world of gardening and prayer. The individual is subsumed by the holy whole.

But what if said individual is gay? Damien struggles with this conflict for fully the first third of Strano, before finally making his way to London as a civilian and slowly learning the perils of Wildean love. That includes an unhappy flirtation with a straight man, and a chance encounter with an old friend from the monastery. Damien is afraid of sex, yet his every molecule craves it.

That tension between denial and desire fuels Strano, though it’s routinely strained by Mathews’ penchant for putting the drama in “drama queen.” When Damien is in a funk, even his stalwart tranny pal Tia Maria seems like a wilting violet.

Yet this book is also marked by some surprisingly deft writing, phrases or descriptions that suggest the voice of a gifted stylist. (That said, one does question Mathews’ structural choice: the book is mostly first-person from Damien’s point of view, but it’s punctuated by long diary entries by another first-person voice, his former abbot. That duality doesn’t always work, but the narrative has a momentum that eventually pulls it through.)

In the end, the true measure of a coming-out story is whether readers identify with the protagonist and experience his or her journey on an emotional level. Strano can be choppy in spots, but on that note, this literary voyage delivers us safely to port.