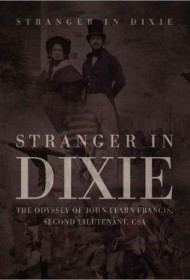 James Fearn has taken his great-grandfather as his subject for this fictionalized biography, a man who certainly seems to deserve the attention, as he lived an extraordinary and adventurous life on three continents.

John Fearn Francis was raised in the English Midlands in the mid 19th century. Despite his family’s wealth, he had an ingrained sympathy for the poor and oppressed, an empathy that ultimately got him into serious trouble. He flirted with the Chartism Movement, which argued for the rights of minorities, and demonstrated against the controversial Corn Laws, protectionist measures designed to keep out foreign grains. In the middle of these political activities, he fell in love with an illiterate but intelligent daughter of Irish immigrants and broke off his engagement to a vacuous young woman of his own class.

His politics ultimately led to criminal accusations and his transportation to Australia as an undesirable. There, he met again with his love, and when he was released, they moved to America on the eve of the Civil War. They believed that it would be a new beginning for them, but soon he was working as an overseer in Louisiana. While his principles remained firm and he did not abuse the slaves, he fought as a Confederate when the war came.

Fearn is a skilled writer, and he has certainly done his research concerning both Australia and America at the time of the Civil War. The plot moves along convincingly. Less successful are the moments when characters speak in dialect — whether Irish or Southern; readers might wince a bit. In addition, the hero lacks any humanizing flaw. He is altruistic, high-minded and honorable to a fault.

Despite these flaws, Stranger is an interesting and entertaining book. It’s easy to imagine the novel being made into a successful film along the lines of Cold Mountain.