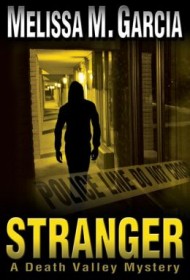 Every mystery has its dark secrets, but the best ones reveal them with a kind of perverse, teasing finesse. And author Melissa M. Garcia does so deftly in Stranger, her second mystery.

Ex-con Alex Delgado and her brother Ric have fled Los Angeles for a new start in the small, gritty town of Lake City, Nevada, safely removed from the disturbing memories and unhealed wounds of their past. Their sanctuary is the Death Valley Motel, the dog-eared roadside motel they run together, comfortable in their anonymity at the edge of civilization.

So when an aging ex-L.A. gang-banger’s corpse is found on the bloody floor of Room 110 at their hard-luck desert motel, a fresh dead guy is the last thing the Delgados need. And their anxiety proves to be caused by something deeper and darker than expensive carpet cleaning and bad press.

They’re not alone. Soon it appears that everyone in Lake City is hiding something — even the squared-away detective who catches the case. And in the closed room of a small town, everybody is a suspect — including the Delgados, whose entangled pasts prove to be both a curse and a blessing.

This sinister mix of secrets, longing and murder underlies Garcia’s tightly crafted story. You can taste the dust and feel the prickle of desert heat as a nicely tangled plot propels you deeper into the case.

Stranger evokes some of the best elements of Rick Riordan’s popular Tres Navarre mystery series before he abandoned crime writing for young-adult mythologizing. Garcia has delivered well-developed characters, strong dialogue and a scrupulously plotted yarn that propels the reader forward without too many distracting detours. The plentiful plot twists are never befuddling and readers are likely to keep guessing right up to the last page.