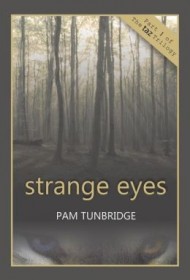 In her chapter book for young adults, Strange Eyes, British author Pam Tunbridge explores the life-changing transformations that human-and-animal companionship can bring about. In clusters of chapters devoted to each of four children and a final section that unites them, Tunbridge details the children individually and suggests that they might share adventures in a sequel.

The children are lonely and discontented, all facing a central challenge as they begin vacationing in a caravan park. Jack and his Mum keenly miss Jack’s deceased Dad. Liam suffers under the worries of his hypochondriac mother and longs to avoid the bullying he receives because he uses an inhaler. Katie keeps to herself because she is embarrassed about her weight. And, as the least intellectually shining member of an overachieving family, Molly feels uncool as she works on weather observations assigned to her during vacation by her meteorologist father.

Each of the children spends a lot of time alone and separately encounters a mysterious dog that has different colored eyes and wears a tag identifying him as “Taz.” They all cherish Taz’s companionship so much that they keep it secret, although they each draw pictures of him for the caravan park’s art competition, bringing them together in the end. Taz plays the role of confidant, leads the less active children to become livelier, and lifts the spirits and confidence of all.

Tunbridge’s book requires copy editing to correct punctuation errors and phrases connected by semi-colons that would work better as two sentences, as well to address a passage where Tunbridge incorrectly characterizes Molly, not Katie, as the child who overcomes a weight problem.

Nevertheless, these accounts of lonely children finding inner strength and confidence make for an appealing read, and the author shows pointed insight into the kinds of issues that children find challenging. Overall, Strange Eyes offers an uplifting summer read for pre-teens, with a surprise ending adding magic to this story of human-canine companionship.