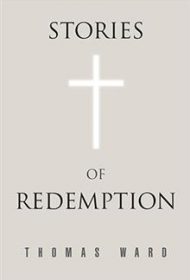 The journey from sin to redemption is a well-trod literary path, persisting because it offers not only hope but a roadmap to our better selves either through direct religious message or allegory. Thomas Ward uses some of both in his aptly titled, Stories of Redemption, a fanciful but sometimes confusing series of tales of people with messy lives who then find clarity and peace.

First is the story of a black drug addict who finds community acceptance and a will for recovery after a singular act of bravery. This is followed by a more fantastical parable of a self-absorbed athlete who seems to hit bottom before deciding to change. While it delivers a clever plot twist, the development feels forced.

Ward switches gears entirely in the book’s remainder, offering a bizarre but intriguing peek into the secrets of a small Southern town. Throughout, he links the stories of a trio of disagreeable sisters who aren’t what they seem; a voyeuristic beauty trapped by insecurity; and the tragedies of poor black students who live amid ingrained racism.

Ward is onto an interesting idea as he connects the lives of his quirky characters. He has a fine imagination and is at his best setting scenes, moving deftly between what is seen and his characters’ hidden thoughts. Unfortunately, he’s less successful at tying everything together. The plot gets bogged down, and people seem to enter the scene and then disappear completely. The side story of the sisters’ secret could be a book unto itself.

The author’s writing tends to wander and can be verbose and preachy: “There is in a person a debase nature, a sinful character that is not only the flaw of man but his downfall . . . The corruption itself becomes ones [sic] lover and life.” It’s the kind of fire and brimstone that works for a specific audience, but Ward could be limiting himself. His wild yarn suggests he has more to offer.