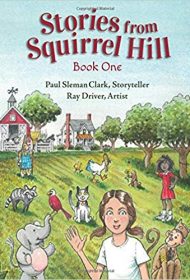 Stories from Squirrel Hill is a charming and engaging anthology of six tales whose characters are the stars of the show.

Madison lives near Briar Woo, a forest filled with adventures, where her friends are a cat named Kitty who loves to complain and two anthropomorphic stuffed animals: Ellie, an elephant prone to sticky situations, and Colonel Monk-Monk, a logistics-loving monkey. These standbys regularly encounter other local creatures, including raccoons, rabbits, and a human girl named Kaila.

In the first story, Madison and her friends attempt to journey through the woods to North Africa, but end up where they started. In another, Kitty surprises even herself by showing kindness to a bird often teased for being bald. The stories work well on their own but are connected enough to enlarge and enliven Madison’s world.

The obvious comparison is to A.A. Milne’s Winnie the Pooh stories. While it would be difficult to rival the appeal and resonance of those classics, Stories from Squirrel Hill makes a valiant effort. The relatable characters have consistent, memorable quirks, and the narration resists over-complication, making it an ideal read-aloud book for adults.

The stories would be enhanced with more introspection. For example, when Madison realizes their journey to Africa has gone nowhere, she’s devastated. But instead of allowing readers insight into her sorrow, which could help children learn to cope with their own disappointments, she merely goes off on her own for several beats, then reappears. Similarly, when Ellie doesn’t get the hat he desperately wants because he refuses to destroy a spider’s comfortable web, his friends compliment his selflessness—but young readers don’t get to hear the conflicting emotions in his head, thus missing an opportunity to learn how to balance their own desires against others’ needs.

Overall, however, these are enchanting tales with a strong, loveable cast of characters. Stories from Squirrel Hill kicks off a series children will surely enjoy returning to again and again.