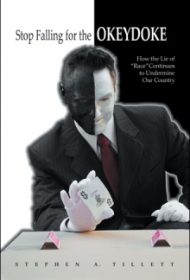 The message of this impassioned book is familiar but bears repeating: Rather than snipe at each other over “race,” black, brown and white Americans struggling for economic survival would do better to find common cause in a fight against the wealthy overlords who’ve for so long divided and conquered them.

Stephen A. Tillett, an Air Force veteran and church pastor who is the great grandson of slaves, defines “okeydoke” as something that is “absurd and ridiculous” or “designed to swindle or deceive.” He believes the “okeydoke” of ethnic relationships—wasting energy on poisonous resentment of one’s own natural allies—is a tragedy based on long-established myths. For one, “race” is not a biological reality, he asserts, but a social construct; we are all Homo sapiens—a single race that originated in East Africa some 200,000 years ago. For another, Tillett rightly points out that African-American urban ghettos and Appalachian white ghettos share the same problems: poverty, despair, educational deficiencies. The real enemies in a rigged game are the greedy master manipulators at the top.

Tillett relies heavily on the influential leftist historian Howard Zinn (A People’s History of the United States) for much of his argument about racial divisions and capitalist greed and gives Zinn due credit. He also invokes Orwell, Einstein, Twain and, most notably, the Bible and the Rev. Martin Luther King Jr. for much of the rest. But Okeydoke is also a vibrantly personal book that manages to balance rage and warm-heartedness. Tillett weaves touching family stories in with his fury over voting rights and the failures of the two-party system; he tells us how a grieving white family, burying their self-proclaimed Georgia “cracker” mother, sought out their African American former pastor to deliver her eulogy. He even finds life-lessons in Star Trek and popular movies.

Ultimately, Tillett proves to be a man of the pulpit and of the ramparts, encouraging Americans to unite. Despite the familiar arguments presented here, his optimism is refreshing.