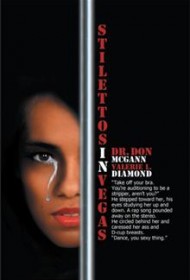 Stilettos in Vegas is an interesting and honest portrayal of the life of a Vegas stripper.

Melissa “Sapphire” Masters has a love/hate relationship with her chosen profession. She loves the attention and action of working at Stilettos, a “Gentleman’s Club,” but longs for a stable relationship and comfortable home for Christina, her daughter who has been seized by child services.

In the beginning portion, the book seems less of a novel and more of a manual on how to be a stripper. Though the insight into the gritty and shadowy world of exotic dancing is compelling, it seems separate from the rest of the story.

After this, readers follow Sapphire through her nights at the club as she shrewdly works the floor. Though portrayed as strong and smart, she shows human weakness as well, mostly in her romantic relationships. (For example, she marries a man only for the security he provides, then cheats on him with Christina’s father.) Sapphire’s story is told with a certain detachment, though a few moments of palpable emotion shine through, the strongest perhaps when she regains custody of her daughter.

The plot shifts dramatically toward the end, in a positive way. Throughout the story, Sapphire has been collecting evidence against the corrupt owners of the club of sexual harassment, credit and IRS fraud. Risking her life, she decides to use the evidence as leverage to fight for better working conditions for herself and other girls. The story’s climax delivers action and suspense, and Sapphire becomes a celebrated heroine. Had the entire book focused more on the suspense plot, rather than Sapphire’s work, loves, and losses, it may have been more successful in fully engaging readers.

Despite an unemotional and disjointed delivery, however, the brave, resourceful female lead and unflinching, no-holds-barred portrayal of a Vegas stripper provide a dramatic read. And the story’s surprise cliffhanger should appeal to those who enjoy suspense.