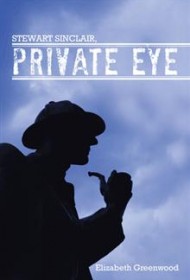 When the pompous and erudite British detective Stewart Sinclair finds himself in need of an assistant, he hires an archaeology student, Sebastian Barnard, who during a gap year from his studies, is working as a female impersonator – a geisha specifically – entertaining sailors in a rundown London club. Together, the pair attempts to unmask criminals in this contemporary collection of seven mysteries that take them to such exotic locales as Uganda, Chile, Haiti, and Egypt.

Stewart is classically educated and guided by the wisdom of the great Sherlock Holmes, while Barnard, certainly the more humble of the two in every way, is more inclined by nature and temperament to coax wisdom from the adventures of Tintin, the Belgian boy reporter. Barnard reveres Jesus Christ and will not tolerate Sinclair’s vain use of His name. Suffice it to say, they are quite the pair.

The book description states that author Elizabeth Greenwood uses Mary Poppins’ maxim that a spoonful of sugar helps the medicine go down, and in this case, the medicine is the exposure of social ills. But the reader will find himself buried in an avalanche of sugar in the form of frantic madcap escapades that seem to have no overall significance.

It’s been said that TV’s Seinfeld was a show about nothing, and one might conclude the same here. The author tantalizes at first, presenting a set of facts that seem fairly straightforward, but each story devolves into something insanely improbable, leaving the reader winded and befuddled because the adventure is incredibly exciting and enjoyable even though it leads to nowhere. In sum, the book reads like Dr. Seuss for adults. It’s a great, lively, and witty patter to no larger purpose – and yet, this reader would devour a sequel gladly.