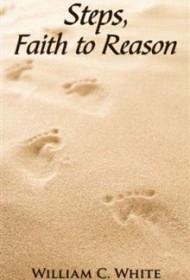 The title of William C. White’s Steps, Faith to Reason may mislead the casual observer into believing it’s a book on theology. But the project of this ambitious work is clearly implied: it represents the author’s sober assessment of the intellectual path humanity has taken from theocracy to secularity, from the ubiquity of religion to the rise of scientific thought. White starts literally at the beginning, sketching a current scientific understanding of the universe’s origins, and moves briskly through foundations of some of the world’s most enduring religious traditions: Hinduism, Judaism, Christianity and Islam. From here he traces the path of philosophy from antiquity to the 19th century in an unabashed tribute to the triumphs of rational thought.

White’s view of religion is not altogether negative: “Religious worship provides a taste, even if ephemeral or fleeting, of stability and a comforting sense of continuity and constancy to many wrestling with the vicissitudes of life.” But in his mind, religions have also served as “instruments of cruelty, brutality and even jihads … ” White certainly values secular humanitarianism above religious faith, but he doesn’t aim to convince a reader through arguments as much as to document a continuous thread of human development through prominent, mainly Western, thinkers.

A strength of Steps, Faith to Reason is its expansive focus on commonly studied thinkers as well as figures often ignored in philosophical histories, such as Lucretius, Petrarch, Montaigne and Bacon. He may rely too heavily on analysis by historian/philosopher Will Durant, so much so that cynical readers might wonder why they’re not just reading Durant instead. White’s book, however, provides an accessible primer to the history of humanism and enlightenment thinking, and it may provide a useful resource to anyone interested in philosophy or the history of modern thought.