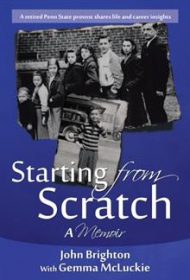 This book’s title refers to John Brighton’s humble beginnings, which are compellingly recounted in this telling of his life story.

One of six children, Brighton grew up poor in Depression-era Gosport, Indiana and lost his father in WWII. Afflicted with an undiagnosed hearing problem and unable to concentrate in class because of what he now believes was ADHD, he struggled academically, barely graduating high school. Nonetheless, his determination got him into Purdue University, where he earned three degrees in mechanical engineering. He later helped develop a heart assist device, and went on to become a highly successful administrator at Michigan State, Georgia Tech, Penn State and Iowa State.

Starting from Scratch is divided into three sections. The first is about growing up in Gosport, the second recounts his academic career, and the third offers additional material, including speeches he made as provost at Penn State University, strategic planning ideas and lists of academic and professional accomplishments.

Brighton takes a nice approach in the book, which is co-written with Gemma McLuckie. Although his successes are many, he doesn’t overly focus on them and seems happy to share credit with colleagues. And for a book written by a mechanical engineer and academic, Starting from Scratch isn’t caught up in jargon or overly technical language. The author keeps things simple and direct. If there’s a quibble with Brighton’s writing, it’s that he seems a tad too serious. Some touches of humor would have rounded out the narrative a bit.

Overall, this memoir is a readable recap of a distinguished 47-year academic career with lessons on several levels: the workings of higher education, problem solving, and overcoming early obstacles in life to succeed. Beyond Brighton’s family and colleagues, this book should appeal to those who were students at the universities where he worked; he offers a behind-the-scenes look that alumni—mechanical engineering or otherwise—might appreciate.