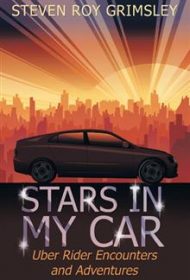 Stars in My Car: Uber Rider Encounters and Adventures is a chronological account of Steven Roy Grimsley’s first year as an Uber driver.

Grimsley is a born moonlighter. Along with his full-time gig as an employee benefit specialist in Knoxville, TN., he narrates audio books and has performed in a retro-folk band and in community theater. He’s also a romantic. When a colleague mentions to Grimsley that he drives for Uber, Grimsley can’t resist following suit. Uber offered “real adventure, real people, real flesh and blood loaded with stories that more or less told themselves!”

Stars in My Car is recounted in brief vignettes “like the rides themselves,” enabling readers to ride shotgun on jaunts in and around town. University of Tennessee students and parents compose the bulk of his fares, although we also meet tourists, workers, party-goers and drunks. In one moderately entertaining vignette, Grimsley picks up a blind passenger who identifies roadside landmarks while providing seamless directions to his destination. But the bulk of the rides are less engaging, such as the one in which a woman from the Czech Republic makes it clear she prefers to ride in silence.

Rather than providing compelling characters, Grimsley’s vignettes are long on physical description: “He was five-foot-eight-inches tall with thick dark red hair combed straight back held tight with gel. His thick beard covered his face with the exception of a small shaved patch of chin…” He also offers detailed descriptions of streets, neighborhoods and traffic patterns, likely of interest only to those familiar with Knoxville, or perhaps other Uber drivers. Finally, the author is prone to overwriting— “The life-stirring event of graduation electrified everybody’s psyche and bones…” —- especially when his material wears thin, as it invariably does.

As an Uber driver, Grimsley seems peerless: considerate, conscientious, discreet. Ultimately, the problem with this literary effort is that some riders are simply more story-worthy than others.