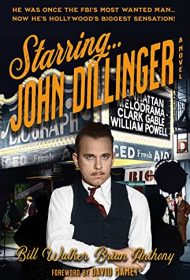 This new novel from Bill Walker and Brian Anthony offers a slice of alternate history: what if the FBI hadn’t gunned down John Dillinger in front of the Biograph movie theater in 1934? And what if he had made his way to Hollywood?

In this version, Dillinger surrenders on his way out of the theater. Although under pressure not to take Dillinger alive, Special Agent Melvin Purvis (the agent who led the hunt for Dillinger in real life) orders his subordinate to stand down and arrest the gangster rather than shooting him.

In prison, Dillinger decides to improve his public image and pitches the idea of starring in a public service film to dissuade America’s youth from following in his criminal footsteps. The short film is a hit and earns Dillinger a pardon and starring role in Warner Brothers’ The Petrified Forest.

Hollywood is fickle, however, and Dillinger battles career missteps while managing his relationship with his girlfriend, newly out of prison herself. Meanwhile, J. Edgar Hoover, who has never forgiven Dillinger for surviving the FBI’s manhunt, pressures Purvis to entrap him.

Starring . . . John Dillinger is an entertaining what-if exercise, particularly for fans of classic film. For instance, one clever subplot has Dillinger’s The Petrified Forest co-stars, Leslie Howard and Bette Davis, peeved that Humphrey Bogart (who played a character based on Dillinger in the real film) was passed over in favor of Dillinger. The novel’s pitch-perfect ending brings this joke full circle. Cinephiles will also enjoy cameos from James Cagney, Clark Gable and Shirley Temple, among others.

Readers may find many of the characters too sympathetic and easygoing, at times verging on bland despite the eventful story. A little more cynicism and edge would give the book some page-turning spice.

That said, the novel is well thought out and should prove enjoyable for film lovers and aficionados of old-time gangster lore. The forward by acclaimed screenwriter David Mamet offers extra appeal.