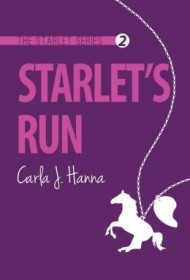 Starlet’s Run is the enjoyable second novel in a trilogy about teen actress Liana Marie Michael, a smart, successful young woman with a tumultuous personal life.

When we first see Liana, she is in the hospital awaiting surgery. Her mother had slipped Liana drugs that halted her aging process in order to prolong her career, and Liana is suffering the consequences. However, the constant presence of her fiancé, Manuel, helps smooth Liana’s frayed nerves. As Liana struggles with health issues and tries to put past hurts behind her, she must face her constant fear of abandonment as new problems surface.

Though Starlet’s Run is the second in a series, newcomers will have no problem diving into this book and understanding the nuances and complexities of Liana’s life. Author Carla J. Hanna does a wonderful job of ensuring that readers can follow the story regardless of whether they’ve read the previous book.

Liana is an interesting character; despite her outward appearance as a young teen (a consequence of her mother’s deception), mentally, she’s much older than her 18 years. She grew up too fast in the spotlight —she was never the priority in the lives of her parents, an actor/actress power couple—and she’s ready for stability. Now she’s in a rush to settle down with Manuel, for fear of being abandoned.

Liana’s voice seems much older than 18 and is devoid of the typical teenager’s use of “like” and “you know.” She learned to speak that way “so that I can run dialogue [practice lines] more fluidly.” It’s not necessary for the reader to know this, but it’s indicative of Hanna’s attention to detail.

The writing in Starlet’s Run is confident and flows nicely, drawing readers into the plot, which, while slightly overdramatic, is nonetheless compelling. YA fans will absolutely want to check out this series, where they’ll find a new heroine to root for in the flawed but sympathetic Liana.