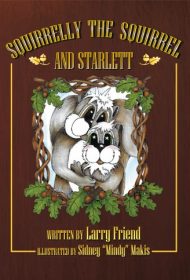 Squirrelly the Squirrel and Starlett follows the story of an anthropomorphic squirrel from his childhood to the birth of his first children.

The illustrated chapter book opens with Squirrelly’s birth. As he ages, his parents teach him how to store food for the winter and how to build a nest. Squirrelly becomes particularly adept at stealing food from every kind of bird feeder put out by the woman in a nearby house, and the two engage in an escalating battle. In addition to this subplot, Squirrelly endures several tribulations, including the loss of his brother to a hawk. Eventually, he meets Starlett, a squirrel from a nearby family. They fall in love and marry, and the story closes after the birth of their children.

Although this is a book for children, the story’s primary concerns feel quite adult. Squirrelly wants a large house, must learn to store food to avoid starvation, and hopes to meet a mate and start a family. The subplots are similarly mature. For example, several hundred words focus—in minute detail—on the various bird feeders Squirrelly manages to sneak food from. In another subplot, Squirrelly must fortify his sister’s home during a storm.

Compounding this maturity problem is the book’s sophisticated vocabulary, which includes words like “imperative,” “epiphany” and “impaled.” These words are italicized and listed in a glossary at the end of the book, but some of the definitions may also baffle young readers; for example, “perpendicular” is defined as “upright position at a right angle,” which is not helpful if you don’t know what “upright” or “right angle” mean. Additionally, some of the definitions are imprecise. “Epiphany,” for example, is defined in an oversimplified manner as: “The sudden appearance of an idea, to realize.”

Despite the cute animals depicted here, this book needs a better grasp of its audience. Its mature themes and delivery will likely hinder its appeal for young readers.