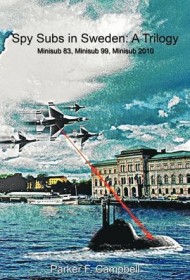 Capt. Peterson Smith is a U.S. Navy SEAL. And an F-14 pilot. And an intelligence specialist. And the son of a U.S. senator. And a captain in the Royal Swedish Navy. (He’s also the perfect soldier and the perfect son, according to the back cover copy.)

Unlikely as it might be for a single person to have such a skill set, it comes in handy with all the derring-do Smith must muster in the three stories that comprise Spy Subs in Sweden: A Trilogy, a trio of adventure novellas by Parker F. Campbell. The author’s bio notes his interest in “literary spy spoofs,” which helps one understand the pulpy tone of the stories.

From exploring a supervillain’s underwater headquarters in the middle story, “Minisub 99,” through challenging another supervillain (named the Wizardess) over her plans to exploit Mars in the final story, “Minisub 2010,” Smith’s heroics take place with foot planted firmly in the fantastic and tongue planted (mostly) in cheek.

The best parts of the Spy Subs novellas indulge in the absurdities of the characters and the genre, as with naming the ultimate project “The Ultimate Project” and dialogue such as “Your Wizardess, are you saying that the Minisub 2010 is … a space sub?” They’d read a bit better, though, if the author had gone whole-hog on the pulp aspects instead of slowing the momentum with unnecessarily technical bits about submarines.

Despite the novella length of the stories, each gets a bit saggy, and the dialogue is often exposition-leaden. (A representative line: “The world is in a race for computer power and data communication transmission capacity, as you undoubtedly know.”) These issues are too pervasive to truly recommend Spy Subs, but it isn’t a bad read for those interested in spy games with a military perspective.