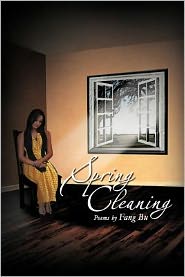 Spring Cleaning, by Fang Bu, is clearly the product of a lively, intelligent mind. The author is a pediatrician whose poems address a number of different situations while sharing a similar curiosity, observance of detail, and varied vocabulary.

Borrowing from William Blake, the second section of the book, “Songs of Innocence, Songs of Experience,” contains a number of engaging poems that exemplify Bu’s interests in science, mortality, the body, and consciousness. The poem “Ophelia” is written in the voice of that maiden after her drowning and portrays her as a tougher sort than the language of Hamlet indicates: “He never saw me drowning either, / mistook my desperate revels / for bliss, / my hard-fought pride / for independence, / the dancing figure / at the cliff’s edge / waving her bathing cap / a mere daredevil.”

In another poem, “The Cosmic Order of Thread Spools,” Bu offers sensory information and uses repetition in fresh ways to create an atmosphere that evokes decay and memory without being morose: “The air is stale with piano notes, / not floating but permeating, / crashing without falling, my hands at the keys a question, / hers answering, rough-spoken. / The air is saturated with ghosts, / not hostile but resigned…”

Bu also dips into culturally-specific settings with the poem, “Chinatown,” which begins, not with nostalgia for ethnic surroundings, but with a proposition: “If Purgatory exists, / mine’s here among / red-yellow signs / the Brooklyn subway / rumbles over at evening, / on crazed asphalt / under refuging feet,” This poem, like many of the others, asks questions rather than answers them, which is a great strength of this collection.

Though not every line is as taut or musical as possible, and the collection as a whole feels like a series of somewhat unrelated poems rather than a single arc, Bu’s poetry is thoughtful and observant. Both specific and universal, it is apt to be enjoyed by a wide readership.