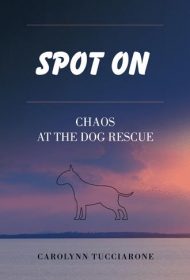 In this second entry in the Spot On dog rescue series, Joe and Lynn, owners of a private dog rescue, are confronted with a series of criminal matters.

Joe and Lynn rescue some sickly puppies from Mexico, animals which are found to be carrying drugs. Meanwhile, two of the couple’s dogs are missing, as is the owner of a dog they’ve been boarding. Lynn conducts her own investigation into these matters. Then, needing a vacation, she and her crew head to rural Maine. But the vacation only turns up more intrigue: dead bodies, a ghost, and buried treasure, to boot.

While the characters in this story are clearly caring people, the narrative suffers from several issues. First, the characters are one dimensional, rather than fully fleshed out.

Second, there’s little attention to detail. For example, while the crew is in Maine in 20-degree weather, two characters jump into the freezing water—with no discernible effects. Further, the buried treasure is over $100,000 in dimes, which the crew brings back to Texas. But how? Although such important information is missing, descriptions of meals and beverages are lavish.

The author also too frequently punctuates sentences she believes to be funny with a “ha ha” at the end. And most of the book is written in simple, declarative sentences, which would be better suited to a novel for young adults rather than mature ones.

Finally, the dialogue is stilted, due to over-attribution, as in this conversation:

“ ‘I hope they give up those people in the house,’ I said to Adam.

“Adam said, ‘I am in the process of getting a warrant…’

Readers expecting to learn the mechanics of owning and running a dog rescue will likely be disappointed. Revision to flesh out the story and characters, and enliven the dialogue would elevate this offering.