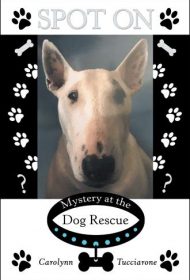 As Spot On opens, Lynn, the operator of the Spot On Dog Rescue, located on her 10-acre property, is enjoying a peaceful morning with Spot, her bull terrier. But the tranquility is soon disrupted when she discovers that the feed room at the rescue has been vandalized and drugs were stolen. The news worsens when she realizes that several of her rescue dogs are missing.

She and George, the caretaker, learn that four neighborhood dogs also are missing. Lynn summons the police, and their investigation leads to word of a dog theft ring operating out of China, where the dogs are abused and slaughtered for food and money.

More bad news follows with a pair of murders, stolen jewels and another missing dog. The crimes seem related, prompting Lynn to do her own snooping, particularly regarding a newly hired hand who had traveled some distance to take a job at her rescue.

This story is a mix of dark news – dog fighting, crime, animal abuse – and the lighter-hearted joy of the daily interaction between dogs and the people who love them. The protagonist’s dedication to the animals makes her instantly likable: “I never refused a dog. I also took the dogs that were about to be euthanized … All the rescues in central Texas knew that I was the first person to call …”

The plot is thin and there is a certain repetitiveness in scenes—such as chapters opening with the color of the sky or characters dining—that becomes tiresome. But Spot On doesn’t strive to be a literary work. Rather, it’s a simple tale of one woman’s love of dogs and her efforts to keep them safe.

While general readers will likely be deterred by the story’s flaws, other dog lovers who appreciate a mostly happy ending might enjoy this tale.