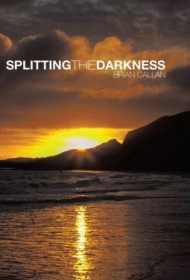 Brian Callan, a native of Cork, Ireland, collects a series of affecting thoughts in his new poetry book, Splitting the Darkness.

Callan has written poetry before, as well as scientific papers; Splitting the Darkness mostly consists of poems written during an 18-month stay in Boston. Callan has also served as a preacher with the Methodist Church, and his poetry is infused with his religious beliefs. To his credit, he writes about many subjects, and generally, the religious elements don’t overpower the human interest.

Callan’s poems strike deep emotional chords, such as the absence of his deceased daughter Nicola, or a meditation on a World War II death camp in “Auschwitz”: “It is hard to imagine the millions/Behind the miles of barbed wire/Who had to take the long walk/But the shoe mountain helped,/They all belonged to someone.”

Added to the poems are a few scattered photographs, along with Bible quotations. The photographs are a nice touch, while the quotes will likely divide readers’ feelings, with more religious readers seeing the poetry in a new light, and those less religious perhaps judging them a distraction from the poems themselves.

The biggest drawback of Callan’s poetry is that, while the ideas are well-considered, the verse itself doesn’t show a great variety of form. Lines are ended at the close of a complete thought, or a breath, making them seem more prosaic than poetic: “I loved it, I would have stayed/But I always knew it was incomplete/That I was needed somewhere else.” Barring the occasional end rhyme, the words seem to spill onto the page — thoughtful, but lacking the rigorous editing that the best poetry requires.

As such, this book’s appeal lies more in its contemplations than its poetic merits.