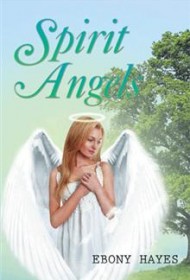 Spirit Angels tells the story of one young woman’s journey over more than a century in search of answers and purpose to her life. Ambitious in scope, it shows potential, although in need of a thoughtful revision.

When 19-year-old Regan is thrown from her horse and hits a tree, she dies, but only briefly. From then on, she is visited by dreams and premonitions that lead her from rural Australia in 1889 all over the world in search of others who, like her, have died yet continued to live. These “spirit angels” have varied powers and can live forever, unless they’re stabbed by a spirit hunter.

Initially, Regan thinks she’s cursed—virtually everyone she’s called to help dies in front of her—but by story’s end she’s reunited with many of these people in New York City in the year 2018 for a showdown with the spirit hunters.

Author Ebony Hayes has a big idea here. Unfortunately, it is far too big for a mere 90 pages and would require expansion to flesh out its characters and plot points, which feel underdeveloped and unsatisfying. The story, which relies on too many convenient explanations to feel plausible, is also disorganized and repetitive. In one scene, for example, Regan discovers the “lifeless body” of an acquaintance, Rachel. “She…had a gash in her chest as if she had been stabbed by something. Regan realised she was too late, that a hunter had beaten her there.” Four paragraphs later, we’re told, “What Regan didn’t know was that only a few moments earlier, a hunter had cornered Rachel in her kitchen.” These loops make forward progress difficult. Numerous misspellings also distract from the story.

Spirit Angels needs proofreading, editing, and special attention paid to keeping the fantasy universe depicted consistent from one scene to the next. There’s a great premise here, but it needs to be fleshed out and polished in order to draw readers in.