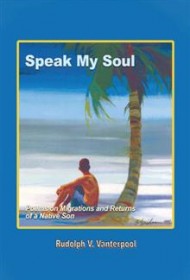 There is a fine tradition of philosophy written as poetry going all the way back to Lucretius’ De Rerum Natura in the 1st century B.C. and forward from there through Milton, Goethe, Wordsworth, Emerson and T.S. Eliot. While Rudolph Vanterpool’s work isn’t quite ready for this exalted company, his new book, Speak My Soul, is a serious effort at casting into poetry a passionately held and deeply considered philosophy of living.

Vanterpool is a professor of philosophy at California State University — Dominguez Hills. Generally, he has avoided delivering a dry polemic of obscure doctrine and instead concentrated on what he refers to in an early poem as “the deep regions of the heart.”

That is not to say that it is always easy going. In his introductory essay, Vanterpool notes the daunting ambition of these poems, writing that they “speak of the realm of existential being-in-itself, of timed-history, of the aspect of eternity, and of faith in a transcendent Messianic other-worldly kingdom.” Following from this, he focuses on the dynamic between reason and faith. While committed to philosophy, he is also a fervent Christian who very much believes in the reality of received wisdom.

Born on the Caribbean island of Anguilla, Vanterpool recalls and ruminates on his childhood in the first two sections of the book, which carry a powerful weight of romantic nostalgia leavened with bitter insights into growing up poor and black in a colonial country. He then more directly addresses philosophical concerns in the book’s last section, where the writing, if anything, gets more interesting.

At 360 pages, the book would benefit from a judicious pruning. The poems dealing with island life could be made more vivid and concrete, and in the last section, some of the poetry stiffens dangerously into academic prose. All in all, though, Vanterpool gives readers a great deal to enjoy and makes good on his notion that “The mind is a map of where we’ve been.”