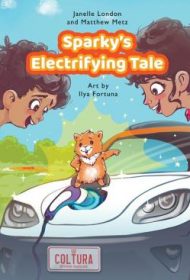 With the aid of his sister and a pet hamster, Rory learns about oil, gasoline and electric-powered alternatives, in the enjoyable and educational children’s picture book Sparky’s Electrifying Tale.

Rory receives a hamster, Sparky, as a birthday gift, and is overjoyed. As he looks for a tunnel for Sparky to play in, Rory’s sister Tina warns them away from an automobile tailpipe. She explains the negative effects of the smoke and soot that come out of those tailpipes, and proceeds to answer Rory’s questions about gasoline and oil.

The tale covers the problems of an oil and gasoline-based economy briefly and effectively: oil spills and leaks from gas tanks; oil refineries and gas stations pollute; carbon dioxide from burning gasoline contributes to global warming. Sparky listens attentively, and when Rory wonders how people can lessen the impact of long-distance travel, Sparky magically produces an electric car.

Rory, Tina, and Sparky are fun characters who show a genuine curiosity and concern for the planet. The story is told in pleasing rhyming verse, flowing melodically: “The carbon dioxide’s invisible stuff./ In nature, it’s fine—the amount’s just enough./ It’s when humans burn fuels that the problems arise,/ using way too much carbon to power our rides.”

The book distills information at a level, tone, and pace that will captivate young readers, and the illustrations nicely complement the tale. A double-page spread shows ancient creatures and their remains turning into oil over time, and finally, a modern-day oil well extracting the substance; it’s a perfect informational tool that quickly puts history into context.

The book recommends readers visit Coltura.org, a website for a nonprofit that works toward “a gasoline-free America.” While a page of tips would have been a nice addition to the book, it’s a minor quibble.

In all, Sparky’s Electrifying Tale is a wonderful introduction to the concept of electric cars, and makes a compelling case for moving away from fossil fuels sooner rather than later.