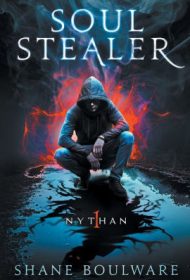 Nythan Dwienz is a cadet in the Air Force Reserve Officers Training Corps studying at a Florida college when he kills a homicidal burglar in his home. Once the burglar dies, a weird mist enters Nythan’s body, and he becomes host to some sort of demon.

No longer able to eat regular food, Nythan is forced by the demon to eat people’s souls. While he initially fights the demon, he eventually seeks peace at a Hindu temple in India, where the two make a deal. The demon then leads him to a group of his followers in New York City called the Raptors, which offers up willing souls for Nythan to consume. The Raptors also face off against a religious-type group called the Ordo Solis.

As the story unfolds, the novel explores the theme of good versus evil, mostly from the evil perspective, as neither the soul-sucking demon, nor his unwilling host are noble. It’s an interesting tale, and Boulware fleshes out even the most minor of characters, employing dialogue that’s natural and believable.
Unfortunately, readers may find it hard to invest in Nythan’s fate, partly because the author doesn’t divulge much about who Nythan was before the demon entered him, nor is there an apparent reason for why he was chosen to be the host. Readers may also be disappointed with the conclusion. While the novel is about a man seeking salvation, Nythan ultimately isn’t redeemed, and evil isn’t vanquished.

Other minor distractions: this 386-page book has 85 chapters total, which makes for an unnecessarily choppy read. And at times, the author compares his characters to movie characters, leaving those who haven’t seen the movie in the dark.

Still, fans of spooky tales of demonic possession will likely find this an engaging story and will be hoping for a sequel, which the author notes is already written.