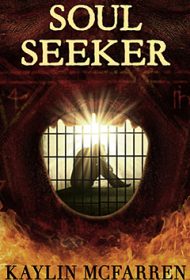 Kaylin McFarren’s new novel, Soul Seeker, is a dark paranormal fantasy. It adeptly blends romance and horror while focusing on the relationship between two main characters.

Crighton is Lucifer’s number-one soul collector, gathering souls for Lucifer so that he can eat them, and he’s done some exceedingly evil things. Meanwhile, Ariel is a young, idealistic angel. When the two of them are kidnapped by a group of humans who experiment on angels and demons, they’re forced to share a concrete cell. After somewhat overcoming their differences, they escape, and Crighton learns they are linked as soulmates—but only after Ariel is kidnapped by another demon and taken to hell.

McFarren, who is known for the paranormal Threads series, is an able storyteller, adept at creating believable characters and captivating dialogue. The initial encounters between Crighton and Ariel establish an interesting dynamic. This exchange, for example, foreshadows their eventual romance: “Crighton sniffed. Ariel’s scent was a sickening mix of baby powder and rose petals, turning the demon’s stomach. ‘Nobody is missing you in Heaven,’ he said, his deep voice echoing in the room. Ariel swallowed hard. ‘Nobody is missing you in Hell.’”

Unfortunately, this compelling plotline doesn’t appear until after the first third of the novel. The beginning section focuses instead on the evil that Crighton wrought on a firefighter named Ben Poe. Poe is on death row after killing his son Gabriel, who was possessed. While this long set-up is captivating, it seems to belong in a separate novella or prequel. It’s also quite graphic, though not needlessly so, which may put off squeamish readers.

Nonetheless, once readers reach the main relationship between Ariel and Crighton, they will relish Crighton’s redemptive journey and their intriguing relationship.

Readers who enjoy paranormal demon and angel romances such as Sharon Shinn’s archangel series and Kim Harrison’s Hollows series will appreciate McFarren’s dark tale about the fight between good and evil.