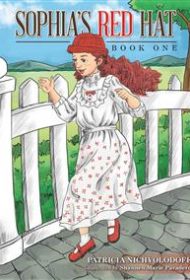 Sophia’s Red Hat is a touching picture book about finding joy in small things and spreading that joy to other people.

One day, Sophia discovers an abandoned red-knit hat. She receives many compliments on it and is unable to find its original owner, so she quickly takes to wearing it. When a big wind steals the hat away, though, Sophia asks her grandmother to teach her how to knit. They each knit a hat for the other, and then, on request, Sophia knits one for her mother.

The hats are beautiful and make the wearers feel lighthearted and beautiful too, so the neighbors soon request their own. Before long, the whole town wears the hats, and their gratitude for receiving one is funneled into everyday kindnesses and the desire to knit a hat for someone else.

This story brims with an infectious joy that makes it easy to read and relate to. Sophia, though not a deeply developed character, is an admirable heroine. The book also seeks to turn the story into a math problem at the end by asking how many hats were knit. (Although a clever way to show the power of exponential growth, this would be more effective if the question had been asked throughout the book; presenting a math problem that complex at the end means it likely won’t be solved.)

The text on some pages would benefit from being shorter and more focused to allow beginning readers to more easily engage with the narrative. But this is overall an enchanting read about the power of positivity. The flaws in Sophia’s Red Hat are overcome by an engaging story and characters and will be a welcome addition to the home or classroom.