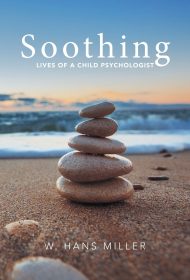 In Soothing: Lives of a Child Psychologist, longtime therapist W. Hans Miller tells two stories: his own, and a broader tale of how “soothing” plays a major role in our ability to cope with everyday life. His main goal, he says, is to share “a lifetime of stories about suffering and soothing on the way to self-acceptance and a kind of contentment.”

Throughout, the author uses the word “soothing” in a general way, rather than as a clinical technique. For example, he speaks of it being “the right touch at the right moment,” and “finding relief, no matter what it takes.” Dividing the book into three parts—his childhood, his practice and, finally, a short blend of insights from both—Miller uses a compelling, almost novelistic storytelling style to help him make sense of his life.

In one section, he recounts a humiliating incident in the principal’s office that triggered a public speaking phobia. In another, he admits an early awareness about his compulsive talking and inability to stop it. With this boyhood sensitivity came a knack for quickly grasping other people’s problems.

In the stories about his young patients, Miller not only shows great empathy but a willingness to find creative solutions. One little girl who kept pulling out her hair gradually stopped, thanks to Miller’s patient approach. An eight-year-old pyromaniac broke the cycle of setting fires after Miller arranged for the town fire chief to visit the boy and dub him the “family official fireman, big red hat and all.”

Occasionally, Miller’s clinical explanations of therapeutic techniques present obstacles. During these segments, it’s as if Soothing can’t decide what it wants to be: a catharsis for the author and narrative for general readers or teaching guide for therapists. Nevertheless, lay readers will forgive these passages and quickly move on, due to the author’s overall absorbing writing style—and both lay audiences and professional psychologists will learn much from Miller’s admirable candor and compassion.