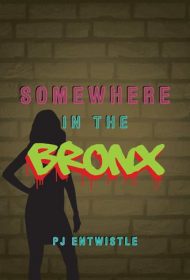 PJ Entwistle’s young adult novel Somewhere in the Bronx follows a young girl coming of age against the tumultuous background of 1968.

Toddy Bethany shares a one-bedroom apartment in the Bronx with her divorced mother, Polly; younger brother, Kevin; and Kevin’s dog, Buck. Like most teenagers, the 13-year-old chafes at the bonds of childhood without truly being ready for the responsibilities of adulthood. Polly won’t allow Toddy a longed-for weekly “late night,” so Toddy often sneaks out to bars when her mother works the night shift at her nursing job.

Toddy bites off more than she can chew one night when a man from whom she accepts a ride tries to rape her. She flees and hops into a cab driven by handsome Norman Easter. Smitten, she lies to him about her age, going to outrageous lengths to get a fake birth certificate from the class troublemaker. Norman’s demons, however, may be too strong for Toddy’s love to transcend.

Entwistle excels at depicting the overwhelming nature of young love, as well as the more mundane aspects of Toddy’s daily life and family relationships. Polly, in particular, is a complex, formidable character. Her loving but turbulent relationship with Toddy is almost painfully realistic.

The family members’ various relationships to the Wayans, a strict Christian sect reminiscent of Jehovah’s Witnesses, also deepen the story. Entwistle offers nuanced portrayals of religious faith, from Toddy’s older brother Butch’s devotion, to Polly’s efforts to please the church hierarchy while remaining true to herself, to a church elder’s malevolent hypocrisy.

Entwistle also uses the 1968 backdrop to good effect. Without being heavy-handed, she conveys how the Vietnam War and the assassinations of Martin Luther King and Bobby Kennedy add to the chaos of Toddy’s adolescence.

By turns funny and heartbreaking, Somewhere in the Bronx is a masterly portrait of a girl losing and finding herself. Though aimed at a young adult audience, the novel should have significant crossover appeal for adults.