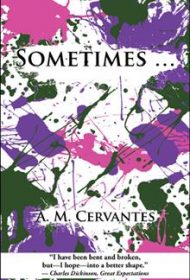 As the story opens, teenager Mitchell Delgado Zeno has just moved from Mexico City to Memphis, Tennessee, with his stepfather. Mitchell’s mother has sent him away, hoping that a change of location will put an end to his out-of-control behavior, which includes drinking, drug use and self-harm.

Mitchell quickly goes back to his old tricks, getting kicked out of his first high school. When he transfers to a new one, he quickly falls in with other trouble makers, and the group spends its days and nights partying, shoplifting, hooking up and bickering with each other.

Sometimes . . . unfolds as a series of scenes and meditations, rather than a linear story. This technique is effective in portraying the narrator’s inner life, but it has its drawbacks. For instance, Mitchell’s guilt over his sexual orientation in the novel’s first chapter seems merely to disappear rather than be resolved or repressed. Likewise, after Mitchell steals a pair of his friend’s earrings, the subplot drops out of sight only to resurface abruptly later on.

Mitchell is a well-read, self-absorbed teenager with literary ambitions. Through this lengthy novel’s first-person narration, Cervantes channels the voice of such a teen so well that it will likely be a liability for some readers:  The writing is rife with purple, sometimes barely coherent prose, homophone errors typical of someone who has learned English as a second language (as Mitchell has) and a fusillade of musical and literary references, some attributed and some not. Nevertheless, the sum of the novel’s parts has a percussive, almost hypnotic quality that draws readers deeply into Mitchell’s world.

Sometimes . . . is not a perfect novel, and it’s not for everyone. Fans of early Bret Easton Ellis or of C.D. Payne’s Youth in Revolt novels, however, will find a similar sensibility at work here, albeit in a less polished form.