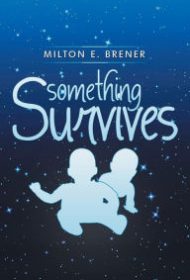 With Something Survives, Milton E. Brener offers a supplement to his 2015 book, Our Quantum World and Reincarnation. Both explore aspects of reincarnation and seek to provide a theoretical model to show how memory on a quantum level could be transferred from a deceased individual to a fetus or newborn.

Brener refers to reincarnation as “a third level of inheritance,” in addition to qualities derived from genes and epigenetics. In this book, he relates 13 case histories that appear to be credible to prove that something of an individual may survive death. What survives, however, may be only fleeting memories, lasting “no more than 7 or 8 years” in the recipient of past-life information.

The author postulates that the means for transference of these memories could be provided by “entangled particles” from the former personality that are inhaled or consumed by the recipient and find their way to the brain. “It is circumstantial, but not yet proof that the atoms stored in the brain, though obviously close, are entangled,” Brener writes.

While explicating his theories, Brener refers to works of such notable physicists as Niels Bohr, David Kaiser, Vladan Vuletic, Alain Aspect and Lawrence Krauss. Concepts concerning the Copenhagen interpretation, nonlocality and simultaneity, the Bose-Einstein condensate, black holes, the holographic principle, and the entanglement that may hold space together all have a place in his narrative.

Although much of his discussion is approachable by the layman, Brener has the scholar’s tendency to assume some concepts are basic that may not be so for the ordinary reader, who, for instance, may need to consult other sources to understand why gravity “plays very little role in particle physics.”

Something Survives also has some typo and subject-verb agreement problems. On the whole, however, Brener’s work represents an intriguing approach to reincarnation that should appeal to those interested in the subject.