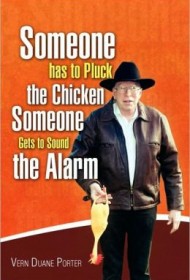 Vern Duane Porter fondly remembers the big, home-cooked meals of his rural Minnesota childhood. But they came with a price: someone has to pluck the chicken, his mother reminded him. The task wasn’t pleasant, but the result was ultimately rewarding.

His potentially metaphorical title is confusing, however, as the author never articulates its relevance. This is not a warm and fuzzy memoir about life lessons learned, but an attack on intellectual elites, the mainstream media and their Hollywood supporters, atheists, evil people waging war on our culture and, above all, “liberals.” (In chapter 12 alone, “liberal(s)” in quotations marks appears 42 times.) Is Porter implying that sounding the alarm on our country’s moral decrepitude is the fun counterpart to the…plucking?

This is more screed than reasoned argument, one bound to offend most readers. Porter, for example, proffers this opinion about lesbians: “A couple of men missed out on the chance to be coaxed, cajoled, and nagged with feminine wiles to become fathers and better human beings because those women decided to take the easy way out and chose the homosexual lifestyle.” (Why easy, you wonder? Because “a lesbian couple doesn’t have to worry if their sexual activity is going to result in pregnancy.”)

Another example: “We already gave in to the ‘liberal’ efforts to spread pornography and allow the public schools to attempt to turn schoolchildren into whores.”

The author’s self-described “rambling observations and thoughts” present opinions as facts (although he does cite Encyclopedia Britannica at length, as well as “talk show chatter”). A retired California civil servant and sometime Mormon, Porter seasons his opinions with Scripture to imply he gets His third-party endorsement.

From “radical environmentalists” to “animal rights extremists,” there is no shortage of straw bogeymen for Porter to knock down. It’s hard to imagine an audience for this book, other than those who already subscribe to the author’s extreme opinions.